Cowboys and indian magazine-generation next - March 2018 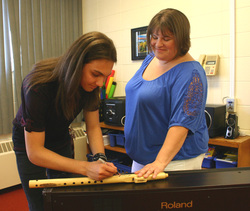 Gareth Laffely is a musical prodigy, a multi-instrumentalist who's been playing since he was four. Although he's just thirteen, he's already written dozens of song and performed with professional musicians. He has a recently released CD to his credit.

Not only is Gareth a musician beyond his young years - he also already has developed compassion for others. That kind heart recently led him to present the Indian Island School with a native flute. He is hoping that leads to more of the instruments coming to the school in the near future and a resurgence of interest in the instrument on Indian Island.

Gareth lives in Tennessee with his mom Susan Oliver (who is a gifted musician in her own right), but there is a strong tie to our area. Oliver is from Orono, with family still living there; she and Gareth frequently come here still.

When they were in Maine this spring, Gareth gave a concert at Indian Island School on the native flute, which he said he hooked him after only playing a couple notes on one while on vacation in New Mexico. He said the response was amazing - but he was somewhat surprised to learn the students had not been exposed to the native flute.

"I had also learned there were no local flute makers, that it was kind of a dying instrument," said Gareth. "It made me want to raise awareness of the instrument, to help try to bring it back."

Gareth contacted an expert flute maker he knew, and that person made a native flute for Indian Island School, which Gareth recently presented as a gift to school music teacher Melissa Barton. More of the instruments may follow.

"We're not sure of the exact number yet. It's something we're trying to still figure out," said Gareth, who also plays piano, violin, drums, and Scottish bagpipes. "Hopefully, we might be able to get a program going at the school on the flute."

Reviving the native flute is but one of the causes on which Gareth, whose dad is a musical therapist, is currently working. He also is involved in work with early detection for cancer (he had a very good friend who passed away after being misdiagnosed) and zero tolerance for bullying. Music is the centerpiece for his good work, and he hopes to be able to continue to use it that way for many years.

"I definitely hope to pursue a career in music," he said. "My main goal is to spread a positive message. A lot of modern music is dark; I want to encourage people to get involved in a cause. It just takes one raindrop to start a ripple that carries across an entire pond."

Gareth's CD, "The Journey," which is described as "one part Traditional Native American Flute -and two parts Jethro Tull," is available online at garethmusic.com. 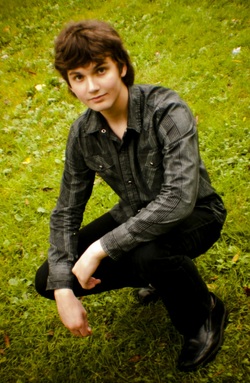 THE TENNESSEAN
A GANNETT COMPANY
Sumner's 30 Most Influential

While other teens watch music videos download others’
songs on iTunes or dream about playing instruments,
Gallatin resident Gareth Laffely has accomplished all
of those things himself at age 13.
As a musician and singer, Laffley says his
Goal is to influence others with his music.  His most
recent effort is the song “Move On,” which he wrote
from the perspective of a husband who had recently
lost his wife to cancer.  Then song was based on a real-
life struggle of a family friend.
Laffely has also filmed a music video for the
song that will soon be released, and the song is
available on iTunes.
“I try to put out a positive message and be a
good influence on younger kids,” he said.  “I try
to help kids see something to look up to and raise
awareness of issues like cancer.”
Laffely’s mother, Susan Oliver, says she hopes
her son can be a good role model for other teens.
“He wrote the song (‘Move On”) to help heal
the hearts of people who have lost someone with
cancer,” Oliver said.  “He has gotten a lot of feedback
from people who have heard it”.
This feedback, Laffely said, makes his work
as a musician worth the effort.