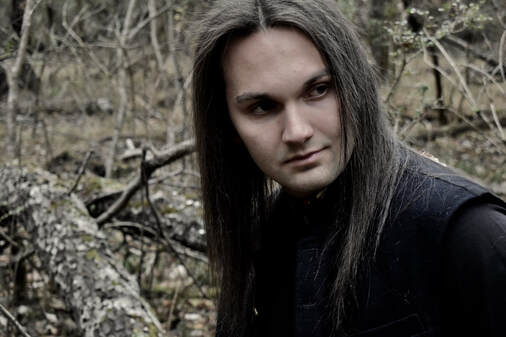 Gareth Laffely is a 24 year old composer, multi-instrumentalist, songwriter,  and producer from Gallatin, Tennessee just outside of Nashville, whose music has been licensed by the Discovery Channel, NASCAR, and Public Television.   An award winning Native American Flute player and composer, Gareth is of Mi'kmaq/Cree descent.  Remarkably talented well beyond his years, Gareth has been touching lives and moving souls all over the world.  He is the youngest performer to reach  #2 on the Billboard New Age Music Top 100 charts for his 3rd CD,  Sky Before a Storm, and was also #1 on the Billboard Heatseekers chart.  His CD project, “Voices of the Guardians”, features Oscar winning Native American actor Wes Studi (Dances with Wolves, Last of the Mohicans, Avatar, and Hostiles),  and Emmy Award winning producer Lance Bendiksen and was recorded with George Lucas’s Sky Walker Symphony at SkyWalker Ranch in Marin, CA.  A companion film based on the Voices of the Guardians CD called “Spirit Song” has been released on GOUSA network and Roku TV.  "Voices of the Guardians" also reached #2 on Billboard's New Age charts.


“He’s a rare talent, and he’s still just a kid. Compared to a lot that’s going on in Nashville these days, he puts the ‘music’ in
Music City.” – Rick Moore, Music News Nashville

Anyone who has ever heard Gareth play knows that his performances flow outward like ripples on the water. The music that flies from his flutes wraps itself around the audience. As he enchants his audience, he also educates and challenges them in the hope that they will become the change he wishes to see in the world.

As Gallatin News reporter April Stillwell writes, "Music was in his bones from the moment he could walk.” At age four, Gareth’s talent rippled outward when he learned to play the drums, and it continued expanding as, at age five, he began composing on the piano.  His piece “Shiloh,” composed when he was eleven, was recorded by the Nashville Suzuki Players and received national radio play in the U.S., and the next year, at age twelve, he became one of the youngest members of BMI, the largest music rights organization in the U.S.

Gareth is self taught on  the Native American flute, his lack of formal training on the instrument would turn out to be the very thing that created yet another ripple. It allowed him the freedom to experiment with the instrument in a way that would astound more experienced players and provide him with his signature sound – a mix of traditional sound and modern edge which, according to Chicago music critic, William Kelly Milionis, “combines the spiritual and healing influences of the Native American flute with the edge of Ian Anderson.”

By 2013, Gareth had written and recorded his debut album, The Journey, with the help of GRAMMY nominated songwriter and Dove Award winning producer, Robert White Johnson (Celine Dion, the Beach Boys, Lynyrd Skynyrd) and an outstanding team of Nashville studio artists. The album was released in July of that year, and in 2014 he received the Rising Star Award, was a two-time NAMMY Award nominee, and a four-time Indian Summer Music Award nominee.  In her review, April Stillwater wrote, “Distinguished and polished, Gareth illustrates a deep soul in his music. Incorporating an ancient instrument (Native American Flute), with a mix of pop and light rock, Gareth’s style is one that has yet to be done."

As a gifted musician and a rising star, it would have been easy for Gareth to focus all of his attention on his music, instead he sent out a new wave of ripples when he wrote and recorded the song “This Time” to be used as the anthem for the anti-bullying campaign that he brings to K-12 schools. He combines the message of the song with a challenge for students to get involved with causes that help make their communities a better place. Native American WWKB/ESPN radio host, John Kane commented that, “The challenges of our youth are particularly troubling and having them addressed by young artists like Gareth is exactly what Native people need.”  In addition to being a vocal supporter of youth issues, he supports his own call for community involvement by volunteering his time and musical talents with a local hospice facility.

Another ripple with the release of Sky Before A Storm, an album that includes “Regen’s Song”, which features 56th Annual Grammy Award-winning New Age pianist Laura Sullivan, and is a tribute to twelve-year-old Regen Morris who lost his battle with cancer on Christmas Day in 2013; “The Journey” a song that honors the spirits of those who lost their lives on the Trail of Tears after the 1830 Indian Removal Act was issued; and the title track “Sky Before a Storm,” on which Gareth plays a haunting  Celtic flute as he pays homage to the Edgar Allen Poe poem, “Annabel Lee.” This album is yet another example of the ever expanding, always reaching talents of a young musician who, as owner of 2 Bears Flutes of Maine, Tony Francis declares, “… knows no boundaries and will take the flute to heights no one has thought of yet.”

It is clear that Gareth Laffely’s ripples continue to expand the radius of reach with every new project. A powerful combination of talent, heart and “[Wisdom] way beyond his years, this young man is not only going places, but is also determined to help change the world for the better in every way he can,” says Robert White Johnson. So, pull up a chair and give a listen, but be prepared to come away from the experience with an altered perspective because, as Gareth says, “A change can start with one small act…anything is possible, you just have to dare to dream.”